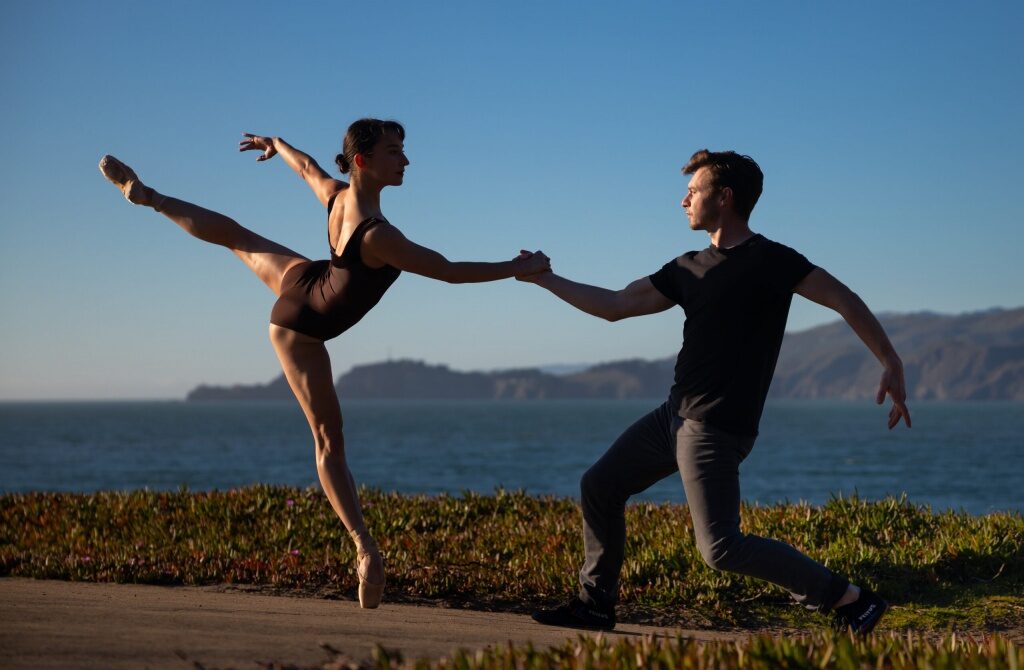 The Chronicle’s Guide to Notable Art and Entertainment Events in the Bay Area.

After more than a year of pandemic pressures, the return of the San Francisco Symphony to their home at Davies Symphony Hall feels like a blessing.

After an opening program planned only at the invitation of first responders, medical professionals and community leaders, the orchestra returns to the public offering with two concerts with the brilliant and extremely resourceful pianist Jeremy Denk.

Denk will conduct the orchestra from the keyboard in two concerts, which are the focus of his musical practice, Bach’s Keyboard Concerto No. 1 and Mozart’s Piano Concerto No. 14 in Es, K. 449. The program also includes pieces by the underrated Afro-American composer William Grant Still and the English composer Gerald Finzi.

Smuin Contemporary Ballet unveiled a new spring series that brings personal performance back into the mix along with the now ubiquitous live streaming viewing options.

The lineup highlights the favorites from “Smuin Songbook” and includes pods of dancers performing pop and classical works from the repertoire of choreographer Michael Smuin, excerpts from “Blue Until June” by choreographer Trey McIntyre and much more.

On Friday, May 14th, for the first time since the pandemic began, the ensemble will take place outdoors behind the studio on 17th Street. The performance shows the “Iris” pod, which consists of Max van der Sterre from San Francisco, Tessa Barbour, Ricardo Dyer, Tess Lane and Brennan Wall at noon and at 4 pm. The “Poppy” pod with dancers Ian Buchanan, Maggie Carey, Mengjun Chen and Lauren Pschirrer is scheduled to perform at 2pm

Masks must be worn during performances. No food or drinks allowed in the performance room. 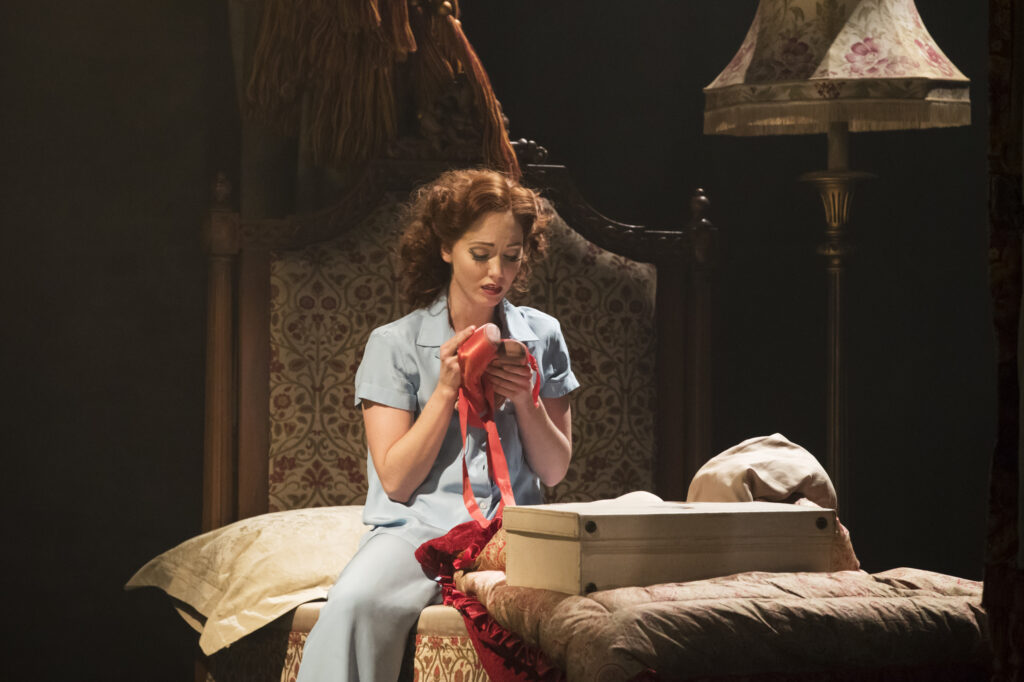 While the Spring Fling of the San Francisco Dance Film Festival is practically happening this year, its online screenings will pay tribute to the live performances we missed during the pandemic.

Starting Friday May 14th, four live filmed productions will be shown at the festival: John Neumeier’s full-length new ballet “Ghost Light”, created during the pandemic; Alexander Ekman’s “A Swan Lake,” a meta version of the Petipa ballet; “YAG The Movie”, the first work by Israeli choreographer Ohad Naharin to be adapted for the screen; and superstar choreographer Matthew Bourne’s acclaimed stage recording takes on Michael Powell’s classic ballet film The Red Shoes. Director Kamy Lara’s Beyond My Steps, which focuses on dance in Angola, will also be available for streaming.

The program also includes a collection of the award-winning dance shorts from 2020, a one-hour screening with 12 films from five countries. The best thing about virtual dance movie screenings? Nobody judges whether you are chasing along with the screen.

San Francisco Dance Film Festival Spring Fling: Available Friday, May 14th through May 23rd. $ 1.99 – $ 14.99 depending on the program. sfdancefilmfest.org 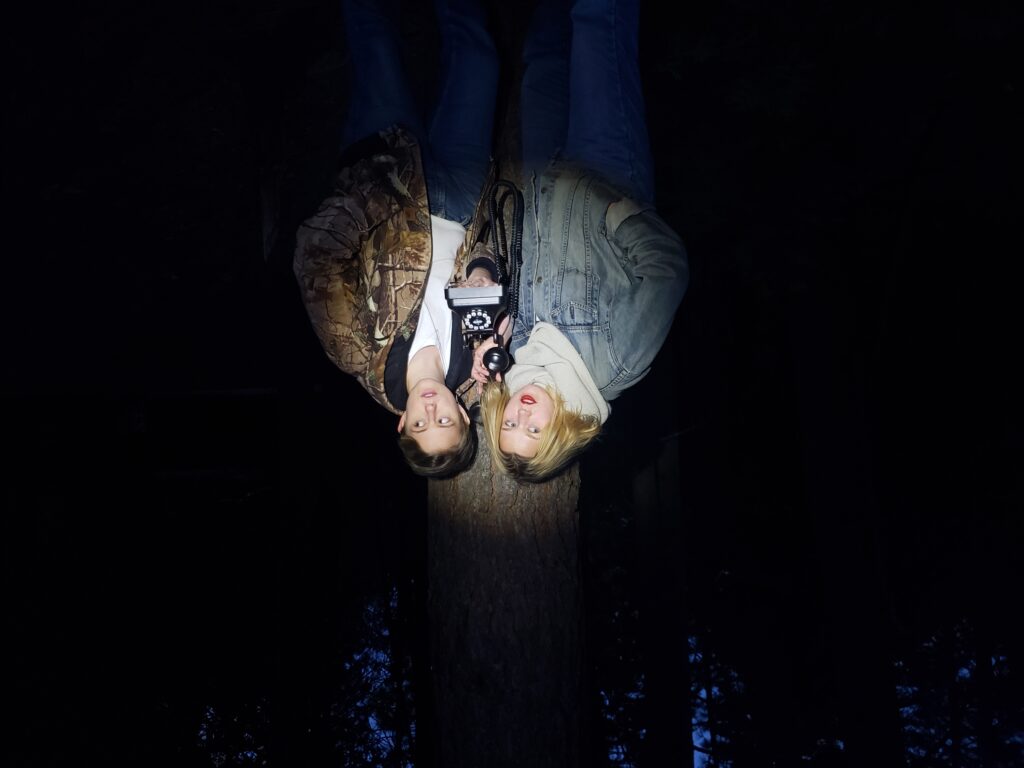 The San Francisco neo-futurists often play games that don’t take longer than a breath – a quick gag, turning the flash on and off.

In normal times, the 8-year-old ensemble’s shtick is supposed to perform 30 constantly changing short pieces in 60 minutes – one joyful, wild one Race against the clock that it has been maintained monthly since the pandemic. Now members Ezra Reaves and Amy Langer have created the troupe’s longest offering to date: a 45-minute piece called “The Program”, which is performed entirely over the phone.

The show, inspired by the insane experience of being trapped in an automated voice menu, speaks to the acute alienation of our time, where the voices of corporate robots may be the only interaction we get all day.

The imagination is similar to that of 600 street men “A thousand ways” in which an automated operator guides two human callers through a conversation. With “The Program” too, Reaves and Langer suggest that a real, living person will eventually disrupt the process. 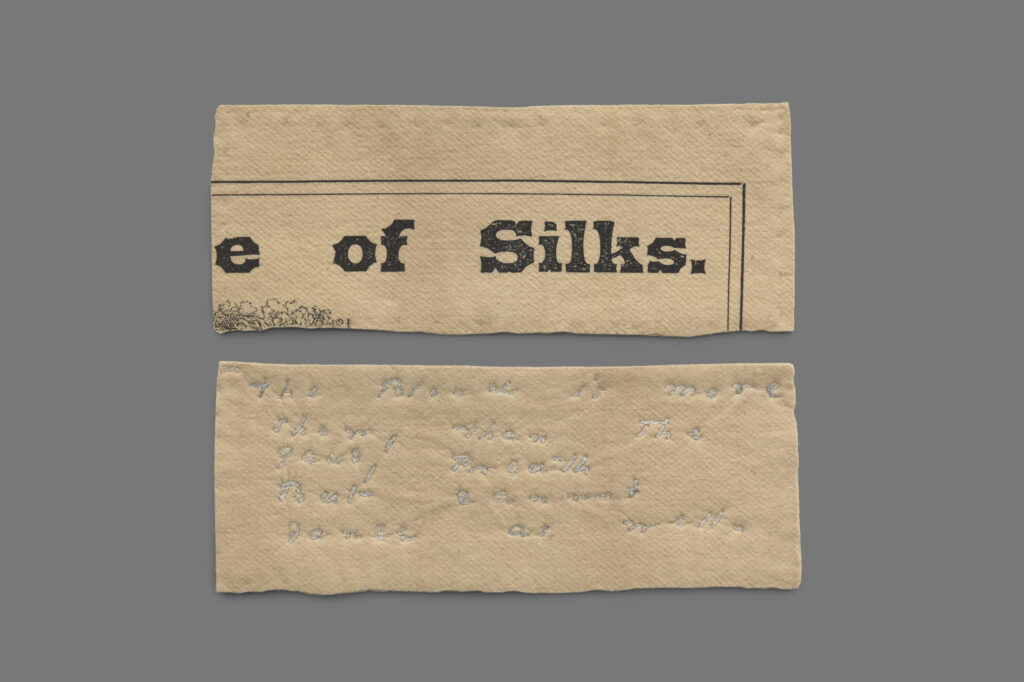 Close Reading 380 and “Silks” by Jen Bervin, part of “Doing and Undoing” at the Catharine Clark Gallery. Photo: Jen Bervin

Jen Bervin’s solo debut at the Catharine Clark Gallery owes its name to an expression that her francophone in-laws often use: “Faire et défaire c’est travailler”, which she translates as “doing and undoing his work”. Consisting of fiber works, installations, and videos, the show draws on poetic tensions she sees between text and textile to explore craft, language, and the intersecting threads between 19th century domestic life and American imperialism.

In the main galleries you can see the new series “Close Reading”, which Bervin created during the Shelter-in-Place. In the textile hangings she presents the late fragments and drafts of manuscripts by the poet Emily Dickinson in enlarged, fabricated forms. Dickinson’s pencil writings are sewn into hand-dyed cotton wool with silver metallic thread, a process that is supposed to evoke the qualities of Dickinson’s compositions.

The pieces have a ghostly feel as if they were written / sewn in ectoplasm. While touring the show, Bervin explained the role that enslaved cotton had played in Dickinson’s writing: Much of the paper she used was a mixture of cotton and wood pulp.

For Dickinson fans, the show is a fascinating addition to their work.

For more datebook picks and to browse our calendar of events, click here.

What’s Behind the Battle Over Part 230

4 in custody after drive-by capturing at Tampa grownup leisure membership,...