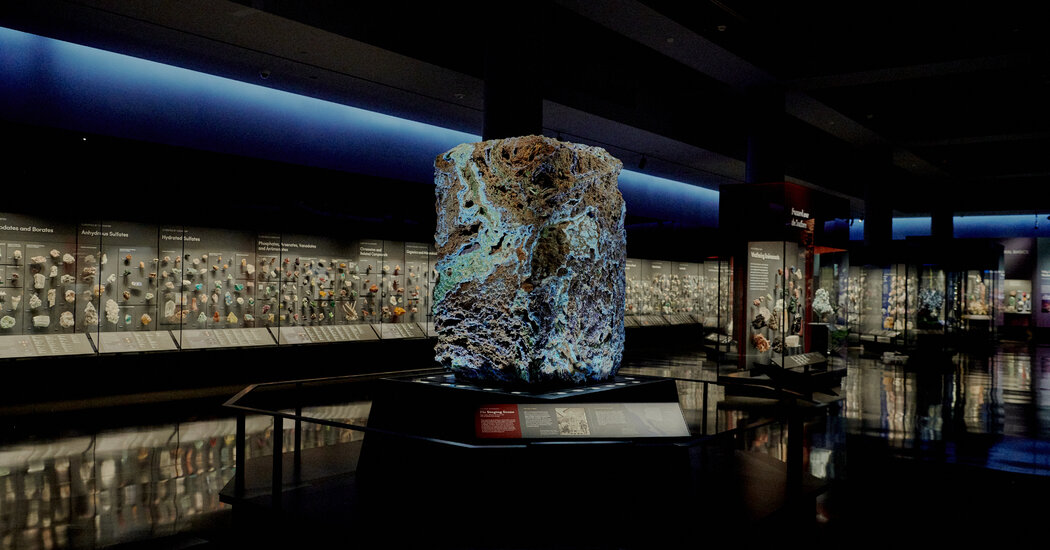 This article is part of our latest special report on museums that focuses on reopening, reinvention and resilience.

When most of us hear the word “evolution” we think of Charles Darwin or the Lucy skeleton. We generally don’t think of inanimate things like stones.

In recent years, scientists have begun to apply the concept of evolution to a specific nonliving but ubiquitous object: minerals. This new perspective enables a different way of storytelling about both minerals, often found as sparkling, colorful crystals in the rock, and the history of the planet.

As the American Museum of Natural History in New York City prepares to reopen its newly designed Allison and Roberto Mignone gem and mineral halls on June 12, the focus is on evolution.

George Harlow, a geologist who has been the museum’s curator of gemstones and minerals for nearly 45 years, said when scientists talk about the evolution of inanimate things, they are referring to changes that occur over time. “It is an answer to the question why non-living minerals have changed since life on earth has changed over the past 4.5 billion years.”

Today there are more than 5,000 types of minerals – more than three times as many as when they were first developed – and over time they have changed in chemical composition and color. The story of how that happened, this development, is a new one for the museum, said Dr. Harlow. “For the first time in this gallery we are examining the effects of life on the mineral kingdom.”

The inclusion of this new science (it entered the scientific mainstream around 2008) is evident in all of the galleries that have been redesigned for the first time since 1976 by Ralph Appelbaum Associates in collaboration with the museum’s exhibitions division, led by Lauri Halderman, Vice President for exhibitions in the museum.

The old iteration of the exhibition hall was dark and had a layout reminiscent of slides and ladders: stairs and winding passages filled with interactive exhibits and touchable stones. But that has changed. The room is much less of a maze now, said Mrs. Halderman. “And less mysterious.”

The redesign feels spacious, brighter, and intentional, with higher ceilings and a palette of neutral grays. Even the lighting in the housings was carefully planned and executed.

Upon entering the new space, visitors are greeted by two towering amethyst geodes, one 12 feet high and the other nine feet high. Its massive interiors resemble a bit the universe itself, with points of white light scattered between glittering, dark purple crystals.

In each glass case, minerals are displayed with the help of handcrafted brackets – a specialty of the museum – so that each specimen appears to be floating. In fact, the entire gallery is designed so that the minerals and gemstones take center stage with little distraction.

“We are very aware of this,” said Ms. Halderman. “We want the room to go back when you are here. Although it’s a beautiful space, it’s not the focus. “

Touchscreens in the galleries remain untouchable monitors for the time being, although one has been adjusted so that visitors can see the information on their phones.

One of the first exhibits is a spiral timeline. A tiny point of light in the center indicates the Big Bang (although Dr. Harlow noted there was no light then) and moves outward, with lines marking events that enabled the birth of minerals, including the formation of the solar system and the Development of the earth’s crust and the origin of life.

And then there are the colors. One of the most compelling of these events was the “great oxygen supply,” a time when the Earth’s atmosphere and oceans first saw an oxygen surge 2 to 2.5 billion years ago, causing a color surge in minerals that hadn’t previously existed. The exhibit includes some spectacular examples such as an intense blue-green chrysocolla; a pockmarked, deep orange crocite; and a glittering, blood-red piece of rhodochrosite.

Storytelling plays a huge role in these exhibits, whether it’s about the shifting of continental plates, the movement of water, or the story of a specific mine. “Scientific standards today emphasize big ideas that are interdisciplinary, such as patterns in nature, cause and effect, structure and function,” said Ms. Halderman. “These will help you understand how minerals are formed, but also how everything is formed.”

In the gemstone hall, around 2,000 of the museum’s 4,700 gemstones are exhibited in warmly lit boxes that line a three-sided room. Gemstones are also minerals that have been cut, ground, and polished to enhance their appearance.

Old favorites are still here but are shown (literally) in a whole new light, like the glowing 563-carat Star of India Sapphire and the 632-carat Patricia Emerald. A new addition to the collection donated by the New York jewelry retailer Siegelson is the organdie necklace designed by Michelle Ong with more than 110 carat diamonds set in platinum and resembling a finely woven lace collar. (The necklace was worn by singer Rihanna on a recent cover of Essence magazine.)

Again, the focus is on storytelling (small monitors initially display a scannable QR code that visitors can use to see identification information on their cell phones). “We decided to use our labels to tell global stories to visitors,” said Ms. Halderman. This includes stories about the places gemstones are found, how they are cut, their colors and unique properties, chemical composition, industrial uses, cultural uses, and meaning.

A standout feature in the redesigned halls is the space for minerals and light with displays designed to show how light illuminates and interacts with gemstones and minerals, including those hidden deep in the rock.

The room feels a bit like a small theater, but instead of a movie screen is a huge, glass-clad slab of rock – 19 feet long and nine feet high, weighing nearly 10 tons – from the Sterling Hill Mine, a the once active zinc mine in New Jersey is now a mineral and mining museum.

In daylight this huge rock is only a cloudy brown, but when it is struck by ultraviolet light, its appearance changes as mineral layers glow in fluorescent colors. As the wavelength of light changes, the colors change too, from magenta and light green stripes to almost blinding orange and lime green.

Throughout this redesigned gallery are memories of the importance of size and time, as well as memories that the living and the non-living – life and rocks – may appear as opposites on the surface, but are actually deep and deeply connected.

Digital leash on employees might be crossing a line

‘On That Fringe of Worry’: One Girl’s Battle With Sickle Cell...

Daniel Vegors - May 31, 2021
0
NASHVILLE — She struggled through the night as she had so many times before, restless from sickle cell pain that felt like knives stabbing...