An ongoing outbreak of a deadly strain of bird flu has now killed more birds than any past flare-up in U.S. history.

The virus, known as highly pathogenic avian influenza, has led to the deaths of 50.54 million domestic birds in the country this year, according to Agriculture Department data reported by Reuters on Thursday. That figure represents birds like chickens, ducks and turkeys from commercial poultry farms, backyard flocks and facilities such as petting zoos.

The count surpasses the previous record of 50.5 million dead birds from a 2015 outbreak, according to Reuters.

Turkeys in a barn on a poultry farm.

On farms, some birds die from the flu directly, while in other cases, farmers kill their entire flocks to prevent the virus from spreading after one bird tests positive. Such farmers have occasionally drawn condemnation from animal welfare advocates for using a culling method known as “ventilation shutdown plus,” which involves sealing off the airways to a barn and pumping in heat to kill the animals.

The virus has raged through Europe and North America since 2021. A variety of wild birds have been affected worldwide, including bald eagles, vultures and seabirds. This month, Peru reported its first apparent outbreak of highly pathogenic avian influenza after 200 dead pelicans were found on a beach. 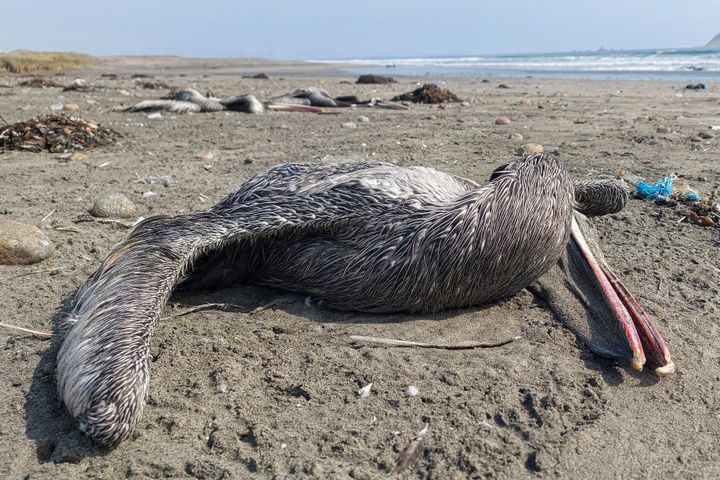 Pelicans suspected to have died from highly pathogenic avian influenza are seen on a beach in Lima, Peru, on Nov. 24.

The migration of infected wild birds has been a major cause of the spread. Health and wildlife officials urge anyone who keeps domestic birds to prevent contact with their wild counterparts.

While health experts do not generally consider highly pathogenic avian influenza to be a major risk to mammals, a black bear cub in Alaska was euthanized earlier this month after contracting the virus. Wildlife veterinarian Dr. Kimberlee Beckmen told the Juneau Empire newspaper that the young cub had a weak immune system.

Over the summer, avian flu also spread among seals in Maine, which the National Oceanic and Atmospheric Administration believed contributed to an unusually high number of seal deaths.

The Centers for Disease Control and Prevention states that the risk “to the general public” from the bird flu outbreak is low. However, the agency recommends precautions like wearing personal protective equipment and thoroughly washing hands for people who have prolonged contact with birds that may be infected.

In April, a Colorado prisoner working at a commercial farm became the first person in the U.S. to test positive for the new strain, though he was largely asymptomatic.

Michael Jackson’s Nephew Jaafar To Play Him In Biopic

Beyond the Border – The New York Times

‘I’m kind of lazy.’ Why We Aren’t Going Back to the Movies – The Assignment with Audie Cornish