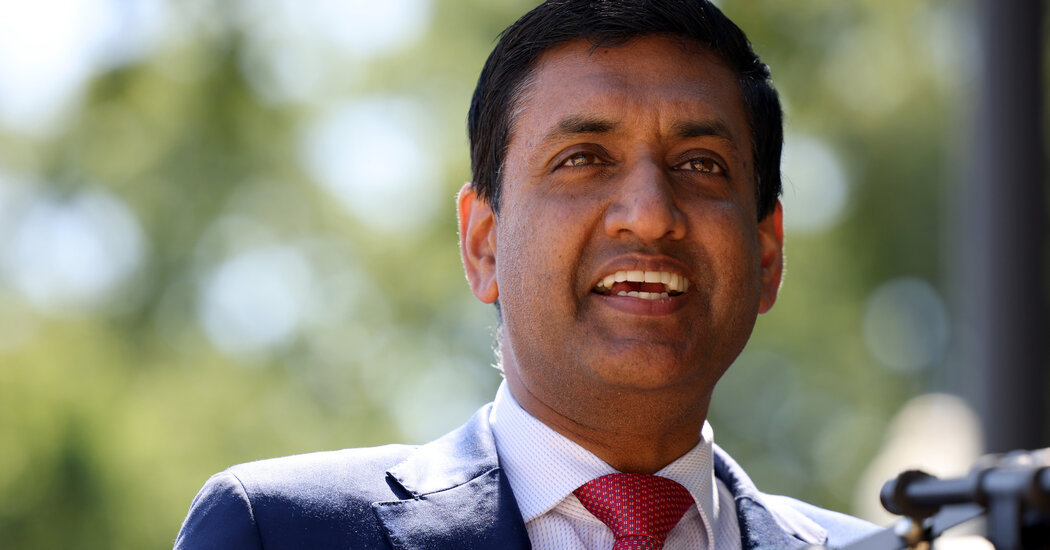 The chairman of a House subcommittee is calling for executives from Exxon Mobil Corp., Shell, Chevron, and other major oil and gas companies to testify before Congress about the industry’s decades of efforts to conduct disinformation campaigns on climate change.

Rep Ro Khanna, a Democrat from California, said Friday he was ready to use subpoenas to force companies to appear before lawmakers if they don’t voluntarily do so.

The move comes a day after a secret videotape was released of a senior Exxon lobbyist saying the energy giant battled climate science through “shadow groups” and targeted influential senators in an attempt to weaken President Biden’s climate agenda. Several of these senators said this week that the lobbyist exaggerated their relationship or that they had nothing to do with him.

“The video was horrific,” said Khanna in an interview on Friday. He called it the latest evidence of the fossil fuel industry’s efforts to “engage in climate denial and manipulate public opinion and inappropriately influence policy-making in Congress.”

Mr Khanna said the House of Representatives’ Environmental Oversight and Reform Subcommittee, which he chairs, will be issuing letters to top executives at Exxon Mobil, Shell, Chevron and other oil and gas companies and trade groups next week requesting documents and testimony. A major target of the panel’s investigation is dark money groups funded by fossil fuel companies to spread falsehoods about climate science and policy solutions. The hearing is due to take place in the autumn.

Rep. Carolyn B. Maloney, the New York Democrat who chairs the oversight committee, said she was “very concerned.” through the new video evidence showing Exxon knowingly tried to block action to combat climate change, “and said it intends to hold Exxon and other companies accountable.” Only Ms. Maloney, Chair of the Full Committee, is authorized to summon.

So far, Khanna said, oil and gas executives, unlike representatives from other industries, have resisted requests to appear before Congress. “I think it’s amazing, honestly. Tech CEOs from my district showed up. Wall Street executives appeared before Congress many times. Pharma executives, ”he said. “We fully plan to issue subpoenas if they don’t come voluntarily.”

After the video was released on Thursday, Exxon’s chief executive officer Darren Woods released a statement stating that Mr. McCoy’s remarks “in no way reflect the company’s position on a variety of issues, including climate change policies and our firm commitment to CO2 pricing “is important to combat climate change.”

The video was shot in a stabbing action by environmental group Greenpeace UK, which was conducting a fake recruitment interview with Mr. McCoy, Exxon’s Senior Director of Federal Relations. In the video, McCoy describes how the company targeted a number of influential senators to reduce the climate regulations in President Biden’s comprehensive infrastructure bill by attacking the tax hikes that would pay for it. A bipartisan package that Mr Biden has now approved leaves out many of the ideas the president originally proposed to reduce fossil fuel burning, which is the main driver of climate change.

Mr McCoy also said in the recording that Exxon’s support for a carbon tax was “a big talking point” for the oil company, but he believed the tax would never be introduced. A carbon tax is a charge on the carbon content of fossil fuels that is designed to reduce emissions by making more environmentally harmful goods more expensive to produce. Carbon dioxide emissions from burning fossil fuels trap the sun’s heat and are a major contributor to climate change.

In the recording, he also said that in the past the company had aggressively fought climate science through “shadow groups”.

When asked who was critical to Exxon’s efforts, McCoy chose Senator Joe Manchin III. based in West Virginia and said the company is in weekly contact with his office because “he’s not afraid to make his claim early and completely change the debate.” Mr McCoy also said Exxon lobbyists are “looking for the moderates” among Democrats, identifying Senators such as Kyrsten Sinema and Mark Kelly from Arizona, Jon Tester from Montana, Maggie Hassan from New Hampshire and Chris Coons from Delaware as targets of their reach.

The spokesman for Mr. Manchin said that Mr. McCoy “greatly exaggerated his relationship and influence” with the Senator’s staff and that Mr. Manchin normally meets with a wide range of people.

Advisors to other Democratic lawmakers said the senators never met with Mr. McCoy or any Exxon officials during the infrastructure negotiations. Senators Coons and Hassan also said in statements that they support President Biden’s efforts to pass climate laws.

Wholesale costs rose 7.3% in June from a yr in the past for report surge

‘I Am Value It’: Why Hundreds of Docs in America Can’t Get a Job

Daniel Vegors - May 31, 2021
0
The 100 geodesic domes of the Svalbard Satellite Station are located on a plateau on an island in the high Norwegian Arctic and look...