LONDON — Greetings from England, where I’m currently writing this dispatch from overseas, here to promote the NFL’s first of five international games this season. The Vikings and Saints will clash at Tottenham Hotspur Stadium on Sunday (9:30 a.m. ET on NFL Network).

As I write this column from my hotel room, I know there are a lot of people hurting back home.

Here are my five Week 4 thoughts amid what is no doubt a week in which football is an afterthought to many.

Here in London, there are giant posters and banners promoting the Saints-Vikings game everywhere you turn. The face on most of them? Minnesota receiver Justin Jefferson.

There’s a pub (see, I use the lingo) here called The Barrow Boy and Banker, and it’s quite literally decked top to bottom in a 50-foot poster of No. 18. And after Week 1, that seemed logical. Jefferson torched the Packers and their vaunted defensive backfield for eight catches, 174 yards, and two touchdowns.

But Minnesota’s last two opponents have adjusted. Jefferson was minimized by Jonathan Gannon’s scheme and the Eagles defense in Week 2 (six catches for 48 yards), and when Detroit blanket covered him in Week 3, it was KJ Osborn who stepped up in the biggest moments for Minnesota.

The Griddy — for every 13-year-old kid who’s doing it all over a Pop Warner field — has been absent from NFL stadiums the last two weeks.

New Orleans comes in with a plan, of course, and with Dennis Allen’s team desperate for a win, the Saints’ likely approach will be to do whatever Philly and Detroit did to quiet Jefferson. You know things are trending in the wrong direction when ESPN has a headline today, “Is it Time to Panic about Justin Jefferson?”

I was a tad hesitant when everyone just assumed because Kirk Cousins was running the same Kevin O’Connell offense used to turn Cooper Kupp into a Triple Crown winner a year ago that Jefferson would have 200 catches for 2,000 yards and 20 touchdowns. It was a bit insulting to all the work of Matt Stafford, Kupp, and coach Sean McVay. It was possible, sure, but to just assume Jefferson would pick up where Kupp left off was asking a lot.

It also dismisses the work defensive coordinators put in week in and week out. Detroit DC Aaron Glenn did a masterful job, mixing coverages, using Jeff Okudah in ways that he hasn’t been used before, and forcing Cousins to rely on Osborn and Adam Thielen because Jefferson wasn’t open. 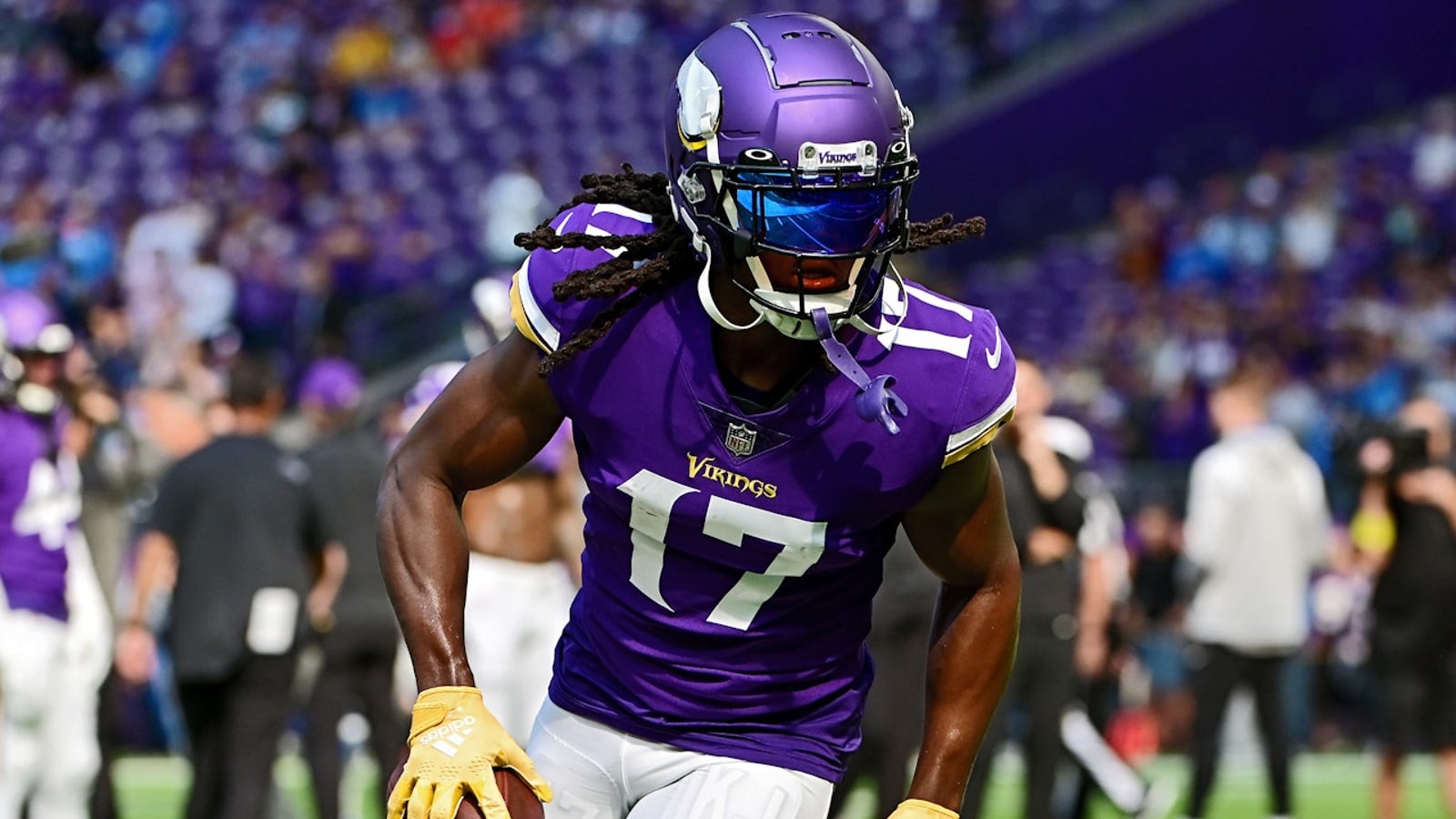 K.J. Osborn led the Vikings past the Lions with a game-winning touchdown grab.

Sunday’s games will be one of those moments where everyone in the football world will be watching. Jefferson has a chance to be the breakout star and an international star. The Griddy needs to make it to London. But the last two teams have found a way to slow down the dancing, like an angry townsperson in “Footloose.”

With Dalvin Cook’s status up in the air, I’d expect an even greater urgency to get Jefferson the ball. I don’t think it’s time to panic about Jefferson, by the way. But it sure would be nice to erase those headlines. Go to work, coach O’Connell.

The Jaguars, the de facto home team of London, are off to a 2-1 start. They could very easily be 3-0 had it not been for a miraculous comeback from Carson Wentz and the Commanders in Week 1. Jacksonville’s last two wins — a dominant 24-0 drubbing of the Colts and a convincing 38-10 blowout of the Chargers in L.A. — were statements not only in the AFC, but around the league.

And the big feedback I’m getting from coaches and decision makers is that the two players standing out the most are the two rookies the Jaguars took in the first round of the 2022 NFL Draft.

First overall pick Travon Walker has been incredible in his first three NFL games, and he is admittedly way ahead of schedule for what I expected in Year 1. Remember, he wasn’t the most decorated player on that Georgia defense, and even when the draft evaluation period was going on, the word on the defensive end was that he is uber-athletic but not as close to as polished as No. 2 overall pick Aidan Hutchinson. Well, Walker’s everywhere on Sundays, and whether it’s polished, has been housing NFL offensive tackles. He has been a playmaker both against the pass and against the rush. His Week 1 pick of Wentz showed his Aaron Donald-style athleticism, and his Week 3 chase down of Austin Ekeler showed his motor.

But Walker hasn’t been as impressive as the No. 27 overall pick, linebacker Devin Lloyd. The rookie out of Utah has interceptions in back to back games, leads all rookies in tackles with 27, and has broken up four passes. That’s in just three games. Lloyd was long rumored to be a top-10 pick. He, like many linebackers before him, slipped come draft day. Why? I don’t have a reason.

When the Jags maneuvered to get him at 27th, it wasn’t met with any great fanfare. No one did the “Jaguars Won the Draft” segment the next morning on sports TV. But looking at Lloyd’s impact just three weeks into the season, it’s hard to imagine 26 better players on the field, let alone nine or 10.

Trevor Lawrence is looking like the player we all hoped he’d someday be, receiver Christian Kirk has been an outstanding addition, and Travis Etienne and James Robinson form a dynamic 1-2 duo in the backfield. But the story for me this season has been those two rookie defenders.

The Eagles (3-0) come in with a ton of buzz and the talent to back it up. Don’t be shocked if Jacksonville, with those rookie defenders, put a wrench in their plans to go 4-0.

Every so often, I’ll throw out the name of a young coordinator or assistant who is worth tracking come January’s hiring frenzy. Often times, you are familiar with those names. Others, it’s a McVay or a Nick Sirianni who I’m putting out there because of all the buzz I’m hearing from other coaches around the league.

Folks, get to know Eagles’ 35-year-old quarterbacks coach Brian Johnson. The offensive coordinator at Florida two seasons ago, Johnson could have interviewed for the Boise State or South Carolina head coaching jobs. He didn’t and instead zeroed in on Philadelphia’s quarterback coaching gig, where he knew he’d work well with Sirianni, and where he was confident he could get the most out of Jalen Hurts.

A former star quarterback at Utah, Johnson went into coaching after his playing days and has been on a rocket ship ride to stardom. Johnson has known Hurts since the QB was a toddler and though Hurts didn’t attend Mississippi State, it was in Starkville, where Johnson recruited Hurts heavily coming out of high school. That relationship remained strong and has only strengthened over the last two years.

Johnson’s spot on the “org chart” is technically under three other coaches: Sirriani, of course, but also offensive coordinator Shane Steichen and passing game coordinator Kevin Patullo. But his role in Philadelphia is far more than just being Hurts’ eyes, ears and mentor. When it comes to some of the exotic things you’re seeing rolled out by Philadelphia on offense, a lot of that comes from Johnson, who’s keenly aware of the latest trends from the college game. While at Florida, Johnson called plays for an offense that saw both Kyle Pitts and Kadarius Toney go in the top 20 of the NFL Draft.

In the NFL’s quest to find fresh faces for the coaching ranks, Johnson’s should be a name worth tracking. Hurts is off to an incredible start in his third NFL season; there’s a guy in Philly who has been by his side for each of the last two … and who has known him for 20 years more than that.

JuJu Smith Schuster leads the team in receptions with 14 through three games, and Justin Watson had an explosive game-changing TD grab in Week 2. But there’s no Tyreek on the roster, and that “big-play” thing the Chiefs were always known for, might just not be there with the snap of the fingers this season.

To see K.C. have multiple three-and-outs in a game is odd enough. To see the Chiefs working so hard to get a big play is just unfamiliar. I’m fascinated how this will play out over the next several months, but after three weeks, I think it’s OK to simply say, “Yes, the Chiefs miss Tyreek Hill.”

Should Chiefs fans be concerned?

Nick Wright discusses his level of concern for his Chiefs after their Week 3 loss at Indianapolis.

It’s easy to be distracted when you’re overseas, but this hurricane is no joke.

Everyone, please be safe and be kind over the next few days. And to the First Responders, THANK YOU for all that you do … always.

Peter Schrager is an NFL writer for FOX Sports and a host of “Good Morning Football” on NFL Network.

Get more from National Football League Follow your favorites to get information about games, news and more.

Which data matters for Chiefs-Eagles a week away from Super Bowl: Sharp Edges

Tom Brady Announces His Retirement, for Good This Time